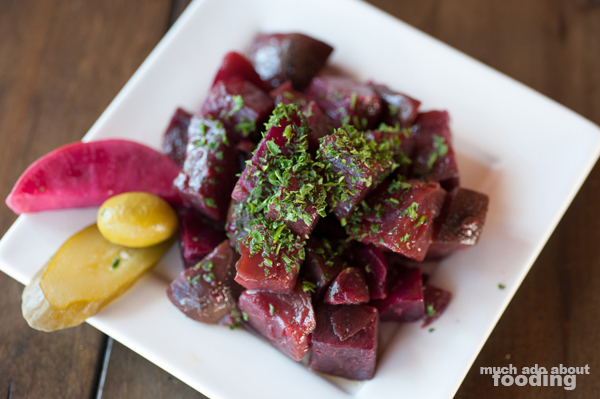 D'Vine is a Genuine Mediterranean Gem for Orange County

"My story is too old. I'm 3,000 years old." Chef/Owner Walid Alarja was matter-of-fact when initially prompted about his food's and restaurant's journey. We were seated in the outside patio of D'Vine in downtown Fullerton, a location second to the flagship restaurant in Brea, and eagerly awaited what Mediterranean treasures the impassioned chef had available. Cooking was not a new venture for Chef Walid by any means as he grew up in the restaurant industry; his family has been running two restaurants and a hotel since 1946 in Bethlehem. Trained at the French Culinary Institute in Egypt and then teaching culinary school for 18 years, Walid knows his food, and you can immediately sense that at D'Vine where fresh ingredients and authenticity rule the plates.

We were invited to visit the Fullerton location which is the newer of the two D'Vine restaurants. The space is expansive with a large and comfortable outdoor patio that allows for large parties and potentially even to continue the raucous antics so familiar to downtown Fullerton. Inside, there is an impressive bar that is well-stocked and wall furnishings that play to the Mediterranean look and feel, complete with a faux stone wall. We adored the choice of lanterns and woven chairs, and the inclusion of event spaces in the wings of the building definitely showed how versatile the restaurant could be for any size group. We then asked for more details on the menu itself:

Pita chips arrived at the table before anything else to start our appetites on, accompanied by olive oil and za'atar seasoning. Already I knew I would like the place. Our cold mezzato begin were the Hummus ($7 - crushed chickpeas with tahini and lemon juice) and Beet Salad ($7 - red beets, olive oil, lemon juice, and salt), both of which came with a smattering of pickles, olives, and pickled turnip which can be ordered as a full mezza serving for $5 (called Turshi). Easily the smoothest, creamiest hummus I had ever had was on our plate. It didn't even look like hummus because it was so unbelievably smooth. Had I never had true hummus until now? Quite possibly so. D'Vine has their technique down pat. In fact, Chef Walid had some things to say about mainstream hummus as well: